Mixin’ Vixens is a recreational, full-contact roller derby league based in Toronto, Canada. The league was founded in 2012 by Knuckle Slamwich, Hijinx, and Caliber. After obsessing over which EXACT shade of blue their new team would wear, these three players split from another recreational team in Toronto to form their own low-contact (LOCO) chapter of the Ontario LOCO association. From the beginning, the primary goal of Mixin’ Vixens has been to have fun while skating with friends! Diebrarian, though not on the initial Board of Directors, helped to establish the social culture of the league that is characteristic to this day, by establishing the practice of team snacks and drinks after regular practices.

In 2014, the then Skater Representative and current president of the board, Gorschach, suggested that the league move to full-contact, which was approved unanimously! Though no longer under the moniker of Toronto Loco, Mixin’ Vixens lives on!

Mixin’ Vixens is a perfect opportunity to participate in roller derby without the pressure of joining a competitive league. We play for fun, which is great for retired skaters, fresh or inexperienced skaters, and competitive players seeking a low-pressure venue to get some extra time in on wheels. We play using the most recent version of the WFTDA ruleset. Our league is open to cis, trans, and intersex women, and gender non-conforming participants, who align with women’s spaces. Please see our full Gender Inclusion Policy for details.

We run weekly drop-in training sessions that are often (optionally) followed by beverages and snacks at a venue nearby, occasional scrimmages against local leagues, and regular social events for our members. We also run fresh meat and intermediate bootcamps at least once a year, but we welcome new skaters to come and try skating at our regular practices. If you are interested in learning how to referee or officiate, please contact us directly before coming out. 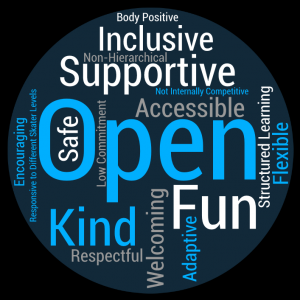